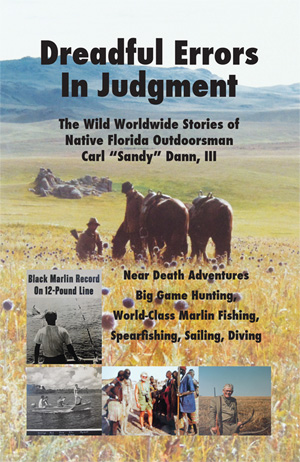 Books were distributed to Sandy. The book can be ordered on www.Amazon.com or other online bookstores.

Dr. Carl “Sandy” Dann, III shares his adventurous Hemmingway-esque tales of hunting, fishing, sailing and exploring all over the world. His lighthearted delivery makes the most horrific of circumstances humorous, as he recounts how he survived in each precarious dangerous situation. The book triggers wanderlust in the reader with rich details of remote hunting grounds on several continents.

For his native Florida, Sandy outlines how one grandfather brought the two-party political system to Florida, and the other grandfather developed much of Central Florida including Historic Dubsdread Golf Course. He gives a colorful peek into Old Orlando through his childhood recollections.

Sandy’s story also inspires creative thinking to strategize family and career to enjoy a life of living out a dream. “Dreadful Errors in Judgment” is a must read for outdoor enthusiasts and anyone interested in Florida history.

GIST by Sandy Dann: “I have a long list of dreadful errors in judgment. How I lived through them, nobody knows. It just wasn’t my time. I have been bitten by everything including fish, barracudas, snakes, black widow spiders, and this and that. The fear left me somewhere along the line. I’ve done a lot of stupid things. But they are funny. And I’m still here to tell the stories.”

WRITER’S NOTE by Casey Tennyson:  Sandy Dann is the epitome of a masterful storyteller. I was given the honor and privilege to document in writing a few of his adventurous tales of his Hemmingway-esque life. The tales truly are best savored in the presence of the storyteller himself articulated with a grin, and gestures for measuring off by pacing steps or placing fingers on a globe. The tales were accented with abundant rare handcrafted collected objects and exquisite artifacts around his home. The charismatic delivery and comedic facial expressions and timing will be missing with the mere words printed in a book, but the tales themselves hold their own.

Tuesday afternoons in the summer through the end of 2012 we met like the characters in “Tuesdays With Morrie”, for interesting, intelligent, and always humorous tales. The meetings were like a one-on-one with Ernest Hemmingway, Daniel Boone, or Sandy’s role model Jacques Cousteau, with a delivery of Norman Vincent Peale. Whatever near tragedy occurred, the punch line was funny, and optimism drove the desire for more tempts with fate. Sandy is of the genre of men of adventurers, explorers, and survivors with the hearty DNA of the American settlers.

His tales included medicine and science of the human and animal bodies, world history and geography lessons. They are wrapped in adventure, suspense, action, motivation and inspiration. His tales contained how-to guides for success in fishing, hunting, business and life. He managed a doctor practice, a large family, and the freedom to hunt all over the world. He is an inspiration to many.

Sandy approaches all of his life with intensity and precision of a master marksman. Hunters and fishermen can sometimes be misunderstood because they kill animals. Sandy  clearly conveyed in each story, his deep care and compassion for the animals, birds, fish, land, cultures and people of the earth. Sandy related and bonded to the erudite in Orlando and equally to earthy primitive people in faraway lands on several continents. In his meticulously maintained photo albums and scrapbooks, he placed in equal measure the things he respected and admired. In the Mongolia album, photos of rugged terrain, exotic animal hunting trophies, a close up of natives’ smiles, a child in traditional dress, and a desert flower all have prominence.

Committing to paper the brushes with death of this most intriguing character, added interest to my own life and most certainly will to readers of the book.

INQUIRE ABOUT A BOOK TO BE PRODUCED FOR YOU: Casey Tennyson is Chart-ing Life Stories in books and films. She is writing, creating, and producing for interesting people, ranches, yachts, islands, ski chalets, private estates, wineries, organizations, unique experiences and more.

Combining the skill of a seasoned journalist with the heart of a creative author and artist, Casey Tennyson brings a unique intellect, intuition and sensitivity to her works. As a filmmaker, she can also produce films for clients.

“The Hunt For Nirvana, The Gentlemen Ranchers of El Saladero, Uruguay, A Collection of Stories and Images from 2004 to 2011” was produced for a group of investors in an estancia as a thank you for the most active rancher and hunter, Dr. Carl “Sandy” Dann, III. Casey Swann interviewed all of the investors and collected photos and created a memoir of the shared experience of the men.

“You did an extraordinary job of editing and formatting that project. Congratulations.” — Buckie Allen, Author

“The last book I read was Charlotte’s Web. Thank you for doing the book on my father. There were stories in there that I didn’t know. I’m glad they are now captured in the book.” — Ms. Sandy Weeks Dann, Shell and Sand Artist

Charticle on Me Strong 5K Race